Before brothers Travis and Steve Tolson opened Amor Artis Brewing 9 months ago, they envisioned their respective roles being a lot different than what they are today.

“I mashed in the first three batches of beer and since then I’ve been in the brew house maybe a handful of times,” said co-founder and owner Steve whose background in Chemistry and Biology hasn’t contributed as much as his business skills have helped make the young brewery hum.

“Since we started brewing the beginning of this year, we’ve launched over 50 different beers. There’s a handful of flagships, but the real fun of walking into a neighborhood brewery is scanning the chalkboard and seeing what’s new on tap,” said head brewer, co-founder and owner Travis who has been churning out beers pretty much nonstop on their 7bbl system.

We took a spin down I-77 S to 204 Main St to meet Travis and Steve, learn about Fort Mill’s emerging brewery scene, hear what it’s like running a business as brothers and who they’d most like to see walk insider their taproom door. We’re thrilled to welcome the brothers and their beers to The Fillmore on Feb. 2 when Amor Artis makes its debut at Queen City Brewers Festival. 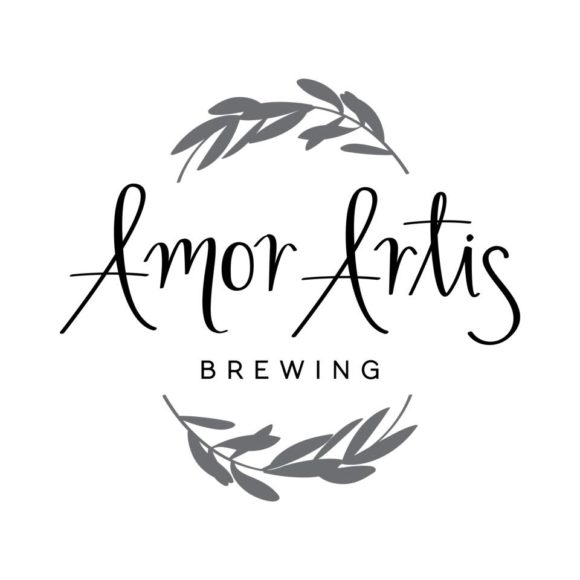 Fort Mill is becoming its own brewery district with the arrival of Amor Artis and several more breweries on the way. Tell us about Fort Mill’s emerging brewery community and its craft beer drinkers.

Travis: I’d say that local craft beer drinkers are pretty happy we’re here in their backyard [laughs]. We’ve been open about 9 months and it’s been unreal. I really think Fort Mill needed something like this, and while I expected local beer drinkers to have an appreciation for craft beer, my expectation of which styles they like turned out to be a lot different than what I’m brewing.

In the area, there’s Dust Off Brewing in Rock Hill, Rock Hill Brewing which opened a few months ago, Legal Remedy’s been open 4 years now, and Slow Play Brewing should be open the end of the year from what I hear. We’ve already become a bit of a community; in fact, I referred one of our first part-time hires to Rock Hill Brewing and now he’s their full-time brewer. Jay, the former head brewer at Full Spectrum is now at Dust Off. If I happen to be low on an ingredient, Legal Remedy has helped me in the past, so all in all, everyone knows and looks out for each other.

Travis, you previously brewed for Wicked Weed. What was the most important thing you learned in your two years brewing in Asheville that you’ve brought to Amor Artis?

At Wicked Weed we had 28 beers on tap at all times at the pub I ran. Having the ability to brew so many styles is something you don’t see at breweries very often. Here, we have 12 beers on tap and for the most part, 10 of those beers will all be different styles. Organizing, scheduling, learning how to brew different styles and how to balance the rotation are the biggest lessons I learned during my time there. 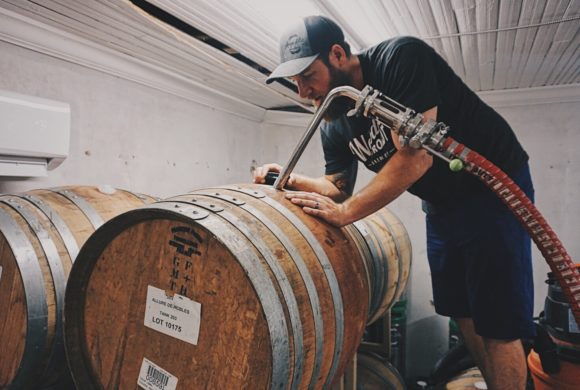 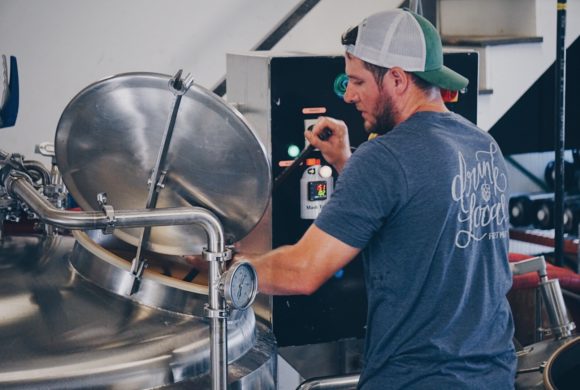 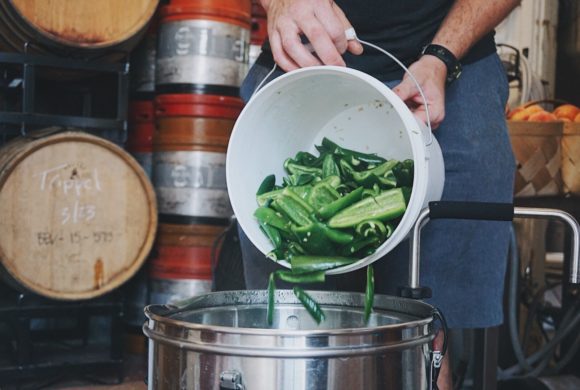 It’s clear Amor Artis is a family affair. What has it been like running a business with your brother?

Steve: For the most part, it’s been pretty easy and fun. If we get at each other a little bit, we’ll go our separate ways, get our work done and then figure it out later. I’d also say it’s brought us closer together – certainly over the last few years.

Travis: Going into this, we thought our roles would be totally different. We pictured Steve working back of house, helping me brew and I’d help up front working the bar here and there. But when we opened up it was like BOOM! We’ve been more or less slammed since day one – like I said, Fort Mill needed this [spreads arms across the taproom]. We quickly came to realize that Steve may want to brew with me, but the reality is we need him front of house, not managing what we thought would be two or three employees, but is now 10. 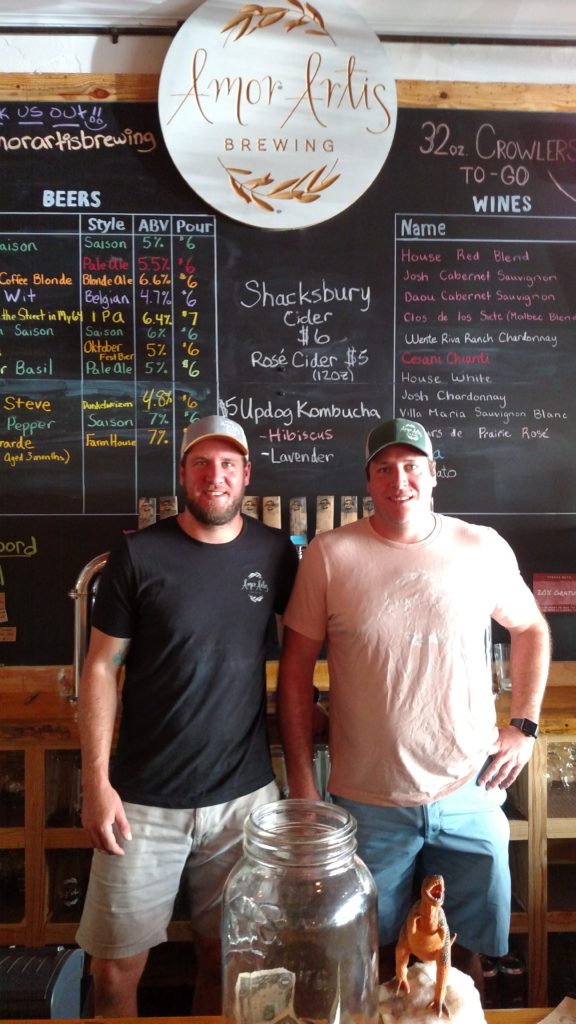 You recently launched distribution in NC with our friends at Artisan Beverage. Will you be canning, any special bottle releases we can expect and where is your favorite place to enjoy a brew outside of your taproom?

Travis: well, we won’t be canning this year unless you count crowlers [laughs]. Our first bottle releases – they’ll be 500ml bottles – will be part of a project called “Like a Fine Wine” where it’s clean-side beers starting with a Chardonnay and Cabernet barrel-aged Belgian tripel, a Belgian wit half in Chardonnay and half Cab barrels and finally a blackberry sour, which we originally launched about four months ago, but only tapped half of that batch so I aged the other half on fresh blackberries from this year. Overall, our goal in distribution is to send a portion of what we’re serving in the taproom to 5, 10 accounts and give the Charlotte market a taste of what they can find right here at the source.

Enjoying a beer out and about, hmmmmmm, I have a really nice lay-z-boy at home [laughs]. Between working in a brewery, attending special events and having two kids; there are just not enough hours in the day.

Steve: honestly, I’d have to say Hobo’s across the street is my go-to for grabbing a beer. It’s crazy, but believe it or not, they’re our #1 account too [laughs]!

Travis: I must add, it was quite a fanboy experience to see our beers on tap at Brawley’s four our launch with Artisan. Considering he’s been in business 15 or so years, and being a longtime customer since moving back to the Carolinas four years ago, it was quite a trip.

Bonus question:  who would you most like to welcome to your Ft. Mill taproom – celebrity/athlete/musician – and what would you serve him/her?

Travis: Growing up, Metallica was one of my all-time favorite bands and they’re playing Charlotte in a couple weeks so I’d love to serve James Hetfield and it’d have to be kombucha since he doesn’t drink anymore. If Kirk (Hammett) came in the taproom, we’d share a Bière de Garde or something nice and barrel aged.

Steve: it’s kind of funny because just the other day someone said I look like Luke Kuechly so I’d have to serve Luke and it’d be our pilsner.

CLT brewed: how CIBA is committed to its communityHolding Court with Primal Brewery