As the craft beer market continues its surge internationally, across the United States and especially here in Charlotte, we have the Cheers Charlotte podcast to thank for keeping us in the know.  The trio of Jay “Weezie” Brown, Cesar Leyva and Ford Craven, all homebrewers and staples in the Charlotte beer community, just toasted one year (that’s 52 episodes to be exact) and don’t expect them to slow down anytime soon.During each 50-55 minute show, the guys cover quite a bit through a number of “cheersworthy” segments.  You’ll be able to catch up on industry news and notes, meet a special guest (like a brewer, event organizer, musician author or chef), go through an official BJCP (Beer Judge Certification Program) beer tasting, hear from a homebrewer in the Homebrewer Spotlight and then wash it all down with some beer trivia. Speaking of trivia, did you know that Weezie and Cesar met through a Queen City Brewers Festival planning meeting?  Now it’s time to interview the interviewers. 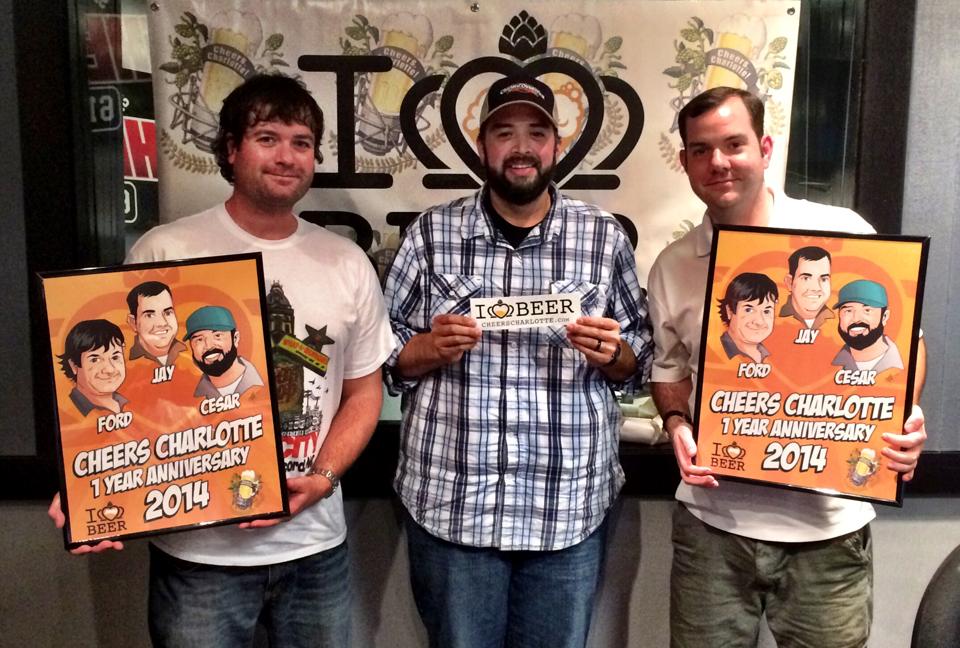 You’ve covered Charlotte’s craft beer scene on a weekly basis for a full year – what aspect of Charlotte’s beer culture drives the show for you?

Cesar:  For me it’s the combination of the local brewery community and the homebrew community.  The show is split into segments, and it’s the focus on the homebrewer that is so interesting and important because, essentially, that is what drives the Charlotte brewery scene.

Jay:  I agree with Cesar in the sense that when we interview professional brewers like Chad and Todd from NoDa Brewing and then feature a homebrewer on the same show, it’s really cool to make that bridge.  The homebrewer can’t help but to feel as if he’s part of something bigger than the recipe he just made on his back porch.

Ford:  What drives the show for me and the reason I’m involved is because it’s a way for me to focus 100% of my attention on craft beer for at least one day a week.  We’re all so busy and scattered in our everyday life, and I’ll certainly pick up craft beer news & notes throughout the week, but this is my dedicated craft beer outlet and in particular I like our educational and beer style segments the most. 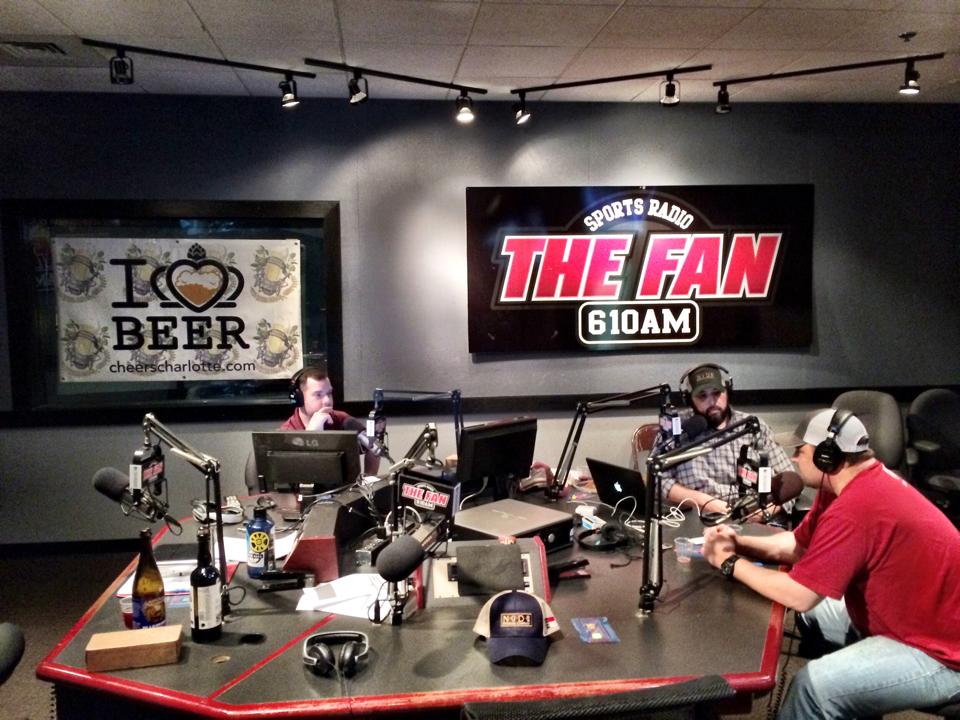 If you had to give one and only one piece of advice to a homebrewer turning pro (commercial brewing), what would it be?

Cesar:  I’d tell him to stick to his gut as far as recipes.  That’s what Chad is doing at NoDa, Sam at Triple C and now Eric at Heist.  The recipes these guys have homebrewed for years is what has gotten them to where they are.

Jay:  I think it’s important for a brewer to try new things too.  Yes, you want to supply your customers with well-brewed beers, but most craft beer drinkers try not to drink the same beer twice so mixing it up and having a wide variety is going to be key.

Ford:  Remember the community.  It’s a shame when you have a homebrewer that goes pro and then becomes totally unreachable.  Yes, it’s a whole new world when you’re tasked with running a successful business operation where before you were homebrewing for fun.  But to bring up NoDa Brewing again, we had Todd and Suzie on the show the week after they claimed a gold medal at the World Beer Cup.  It’s keeping up that authentic connection to your roots that’s so important, in my opinion. 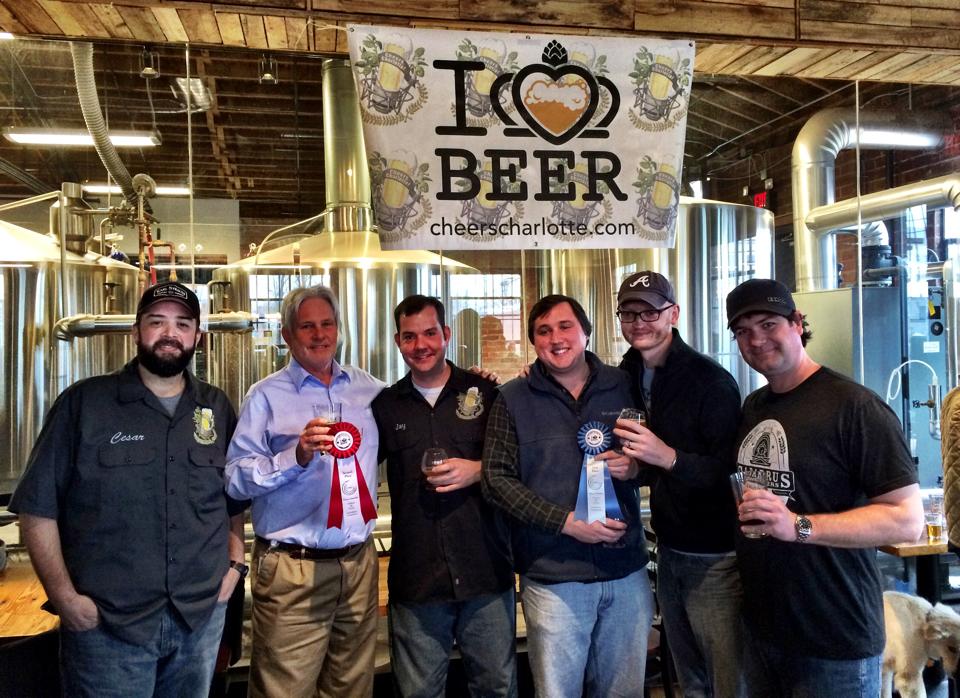 With several recent expansion announcements, friendlier zoning language and new brewery and cidery openings on the horizon; give us your snapshot of the Charlotte beer/cider/spirit landscape five years from now.
Cesar:  I see more attrition.  I see the quality of beer improving with friendly competition – the bar is being raised year after year.  The thing with Charlotte is you have a real melting pot of people from all over the place.  I honestly think you’re going to see the same thing with breweries; breweries specific to style, cideries, meaderies – there will be a little bit of everything.  I’ve also noticed breweries are buying or sitting on a large number of barrels so it wouldn’t surprise me to see a big uptick in barrel-aged and sour offerings.

Ford:  I think we’ll have double the number of breweries that we have now.  No doubt about it.  There are still plenty of gaps outside of NoDa, South End and northern Charlotte.  Plus, the Rocky Mount Brewmill is going to develop a whole new wave of brewers that may just migrate to the state’s biggest city.

Jay:  It’s interesting, I think Charlotte is helping the state progress its craft beer industry and the state is setting the example for the region.  We saw recently that South Carolina relaxed its laws with the hopes of attracting Stone Brewing so it’s logical to think we’ll see greater brewery representation down there.  So to be included in the same beer category as an Oregon or California wouldn’t surprise me.

We know beer tasting festivals are a natural gateway to craft beer.  What was yours?

Jay:  Monday nights at Brixx pizza you could get $1.50 domestic drafts from breweries like Rogue, Bell’s and Highland.  Granted they came in frozen pint glasses, which I didn’t realize was a bad thing at the time, but that’s how I discovered and was able to pay for good beer.

Ford:  It was two separate experiences for me.  In college I worked for Cottonwood Brewery when it was still in Boone so as soon as I turned 21, and maybe a year or two before that [laughs], I had local craft beer right at my fingertips.  As far as the Charlotte scene and this generation of craft beer, it was the Charlotte Beer Club that fueled my interest in the local beer scene and it introduced me and my girlfriend to an awesome network of people.

Cesar:  When I was 21 it was also $1.50 drafts and that was at Karl Strauss in San Diego.  Their amber lager in particular was my go-to, and when I moved to North Carolina I couldn’t find anything like it.  So I went on a beer hiatus, got into wine and it wasn’t until moving to Charlotte and discovering OMB’s lagers that I got back into beer.

With regard to festivals, what makes an event “Cheersworthy” to you?

Jay:  I think it has to have a real craft beer vibe to it, and that is totally indicative of the crowd.   Some beer festivals you know judging by the audience that they’re just there to drink and the fact that there is good beer on hand is a bonus to them.

Ford:  I try to find out what kind of values the festival is representing because it trickles down from there.  You’ll get the brewers, owners and a great audience if there is a true theme or meaning to the festival. 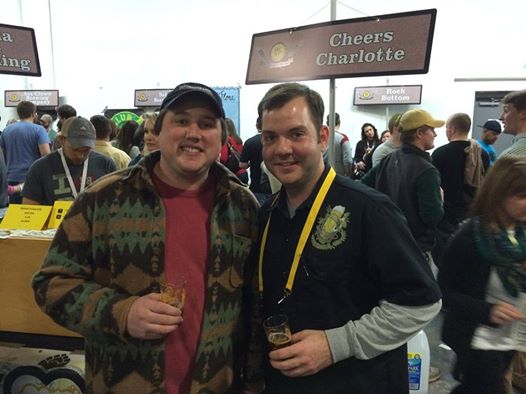 The Unknown Brewing Company is Ready for Game TimeBeer, Wine and Bulldogs