“The beauty of operating on a small system is that the beer is always fresh, but the downside is there’s no margin for error.”

TJ and Maureen Creighton moved to Concord from New Hampshire in 2014 with the vision of opening a brewery that would complement their passions and personality. The family-friendly brewery has drawn comparisons to Free Range and has quickly developed a following since opening in November. Its beers were met with high praise at this year’s QCBF, including a sour named Caroline, a hop-punching double IPA named Big Sis and their Super Brew: a Yucatan stout brewed with chili pepper and cinnamon. You can expect to find more of their high-quality offerings at tomorrow’s North Carolina Brewers and Music Festival.

The nanobrewery, located at Concord’s historic Gibson Mill, started with a 1.5 barrel system and was recently upfitted to produce 3 barrel batches allowing the Creightons to add Thursday to its three day taproom schedule (Thursday – Saturday). While nanobreweries may be synonymous with labor-intensiveness, they do have a variety of advantages as detailed in Daniel Hartis’ Charlotte Observer article.

Strong demand and the addition of brewery neighbor, Cabarrus Brewing Company keeps TJ plenty busy while he and Maureen work full-time jobs and raise their two young daughters. We sat down with the couple to talk startup, nano and favorite beers. 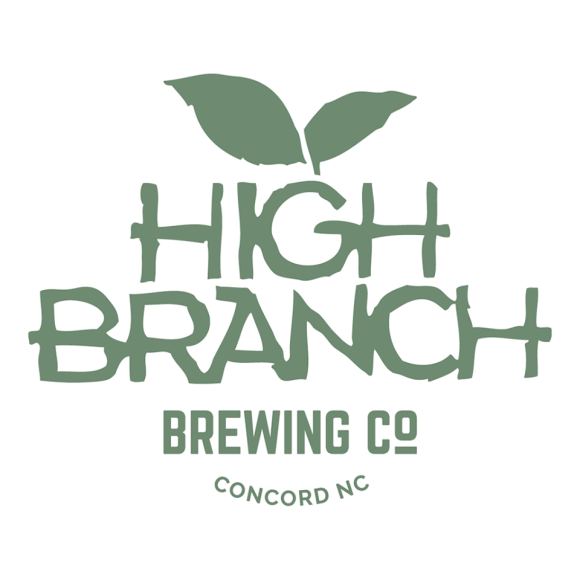 How were you inspired to open High Branch Brewing? Specifically, was there a brewery, beer or experience that you would attribute to you opening a brewery and taproom?

Maureen: We knew that we always wanted to start our own business so it was more about pursuing a venture that appealed to and matched our interests. My last job required a good deal of marketing which I found I really enjoyed and TJ had been homebrewing for more than 7 years, taking particular interest in the science of beer and fermentation. Opening a brewery with a comfortable and relaxed vibe was the goal and we have to thank our neighbor for tipping us off to Gibson Mill. It’s the perfect spot for us. 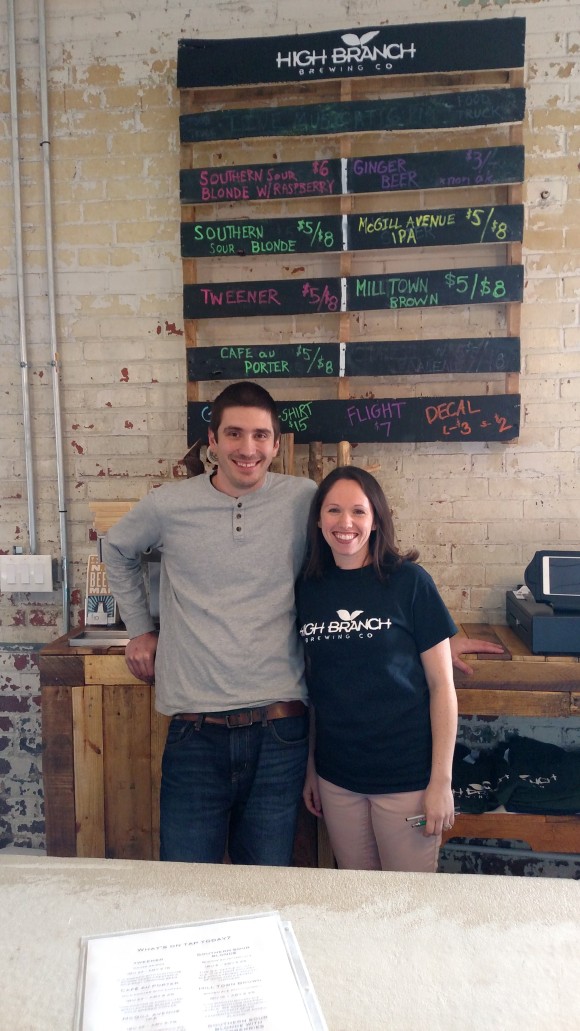 Tell us about your beers, plans for distribution and thoughts on one-off bottle releases.

TJ: I brew beers that I like to drink which tend to be Belgian-style beers, saisons and hop-forward ales. Like most breweries you’ll find that during the winter months we’ll feature darker, heartier beers while the spring and summer months bring brighter, crisper flavors. In the near future we’d like to get kegs out to some key locations with Lil’ Robert’s Place likely being at the top of the list. From there we’ll grow slowly just because we’re not equipped to supply the entire market given our scale.

In terms of one-off beers, I’d really like to get more barrels and develop our sours and barrel-fermented saisons. The idea would be to bottle these for sale in the taproom, and hopefully in the future at places like Salud in NoDa. 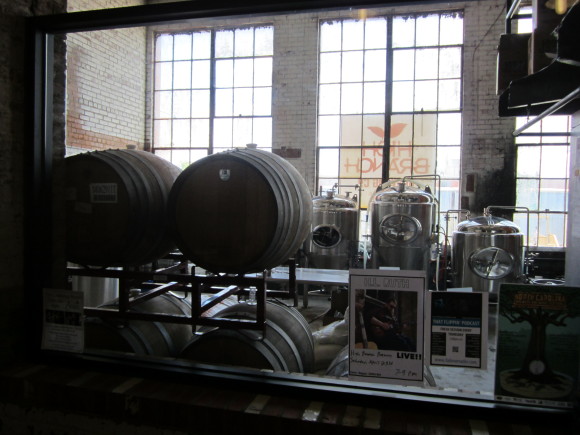 You’ve been open since November. How has the Concord community responded to High Branch Brewing so far?

Better than we could have ever expected [in unison, laughs].

Maureen: Considering we were the first brewery to open in Concord, we were a little bit nervous that the community wouldn’t be so welcoming, but the feedback has been extremely positive since day one. What we hear regularly from our taproom visitors is that they’re so happy to have a brewery in their backyard, whereas before we opened they were making the drive to Charlotte for their brewery visits. It’s nice to be that in-town brewery now.

TJ: From a beer standpoint, and maybe this isn’t so surprising, our Big Sis Double IPA is our most requested beer. Naturally, it’s the most difficult and labor-intensive beer to make [laughs]. 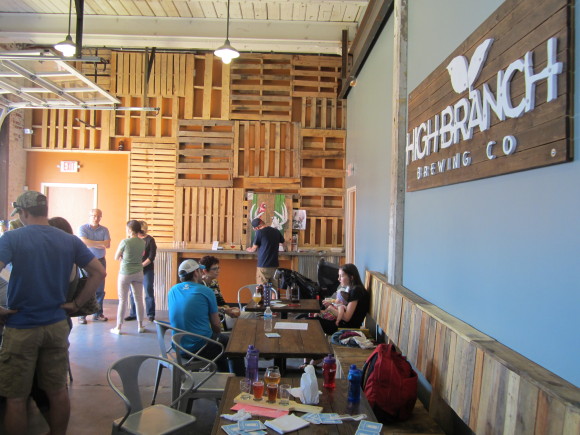 (TJ’s brother, an artist based in Portland, ME, paints at a live art event) 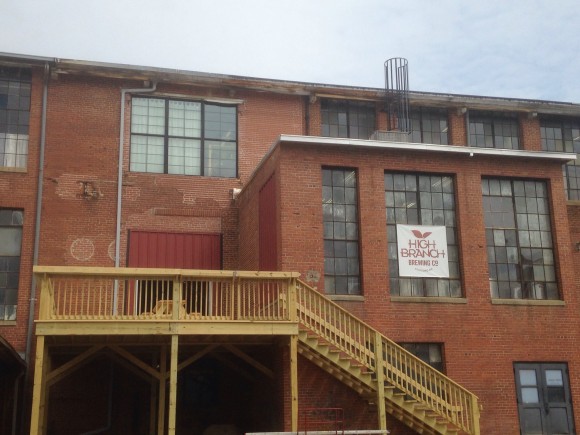 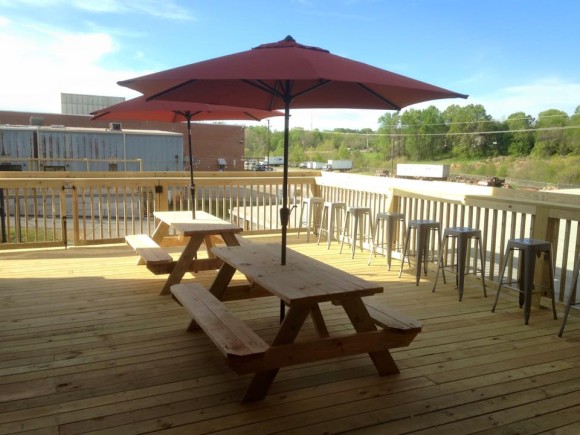 You just closed up shop and are filling a growler to bring home, what are you picking?

TJ: Well, it’s no secret that I brew beers I like to drink. We’re both big fans of sours, but it’s always going to come down to the season; a nice saison or sour in the summer months and a warming imperial stout during the winter. But no matter the season, I know I’ll like the beer [laughs]. 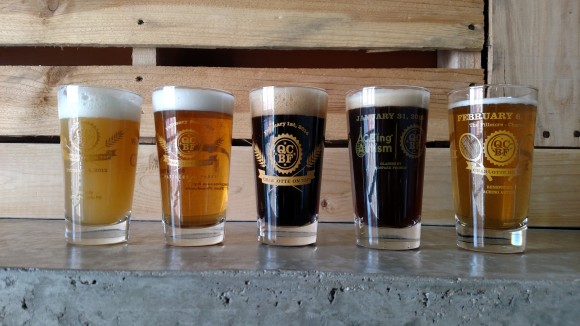